The Sound of Young Seattle

The Sounds of Young Seattle came out in 1984, cassette only, and was put together by local musician David Kulczyk. Described as the “psychodelic bastard children of the Seattle Syndrome” the two volume compilations ( the second one was released in 1985) are documenting a post punk scene that grew around the Pioneer Square dens.
The first volume, the only one available in mp3, so far, features some darkish psychedelic tunes from A Western Family, Big Boat, Crypt kicker 5, Dr. Bombay, Life In General, Ministry Of Love, PMA, Room Nine and Feast Of Friends (would later become Feast). 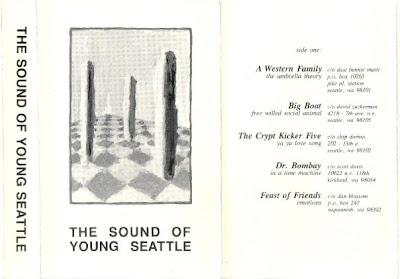 A Western Familly - The Umbrella Theory
Big Boat - Free Willed Social Animal
Crypt Kicker Five - Ya Ya Love Song
Dr. Bombay - In A Time Machine
Feast of Friends - Emotions
Life in General - Desperate Reminiscence (Live)
Ministry Of Love - Dancing On Air
PMA - Obsession
Room Nine - Seas Without a Shore
Note: David A. Kulczyk played guitar in A Western Family, a band that formed in 1983. The band’s line-up also included John Massoni on vocals, Liz Schmoe on bass and David Thierry on drums. After releasing two cassettes, “A Western Family” and “Music from ”, the band called it quits. It was 1985. Some of the remaining members went on to form A Weather Theater.
And also a couple of A Western Familly tunes
Persian Carpets
Behave
Posted by Dan "Cluster" at 10:10 AM

amazing blog, thanks!
I'm dying to hear some Crypt Kicker 5

Why not post the whole tape? You're an idiot.

I cant believe someone would call you an idiot for posting these amazing tracks. Thank you for your hard work, Dan. I have always enjoyed your blog.