A Bloodloss introduction that is kind of late 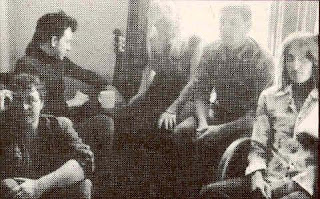 Of course the Martin Bland Ramdomized Control Trials post needed an introduction on Bloodloss, but in my sadist vision of my blog I like to often confuse the readers. It was a long time ago when the Australian punk scene made me a good impression with Cosmic Pshycos and Lubricated Goat...that, in a way, reminded me of Mudhoney, and it wasn't long until I got the connection. The missing link was Bloodloss. They all shared common members -beside Cosmic Psychos, so...let's just forget about them for a while- .Of course this happened in the '90s when Bloodloss moved to Seattle, and what I would like to do, is to post one of their 80s’ material. But before that, the so called introduction:

I've got to worn you it's very confusing, and I don't know if I tell it right...so, go search on the interweb.
Bloodloss formed in Sidney in '82, the line up consisted of Sharon Weatherill on vocals, Renetsar RJ on guitar and saxophone, Jeremy Bender on drums and Duncan Coleman 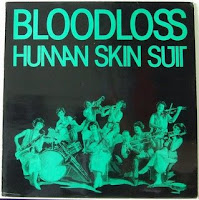 on bass. The band changed it's name into Zulu Rattle in 1984, and had one release, Terror Train. Also the band line up changed again, now including Martin Bland on drums and Jim Selene on bass. It reformed again as Bloodloss in 1986 after Sharon and Renetsar had returned from UK, and released a self titled cassette in 1986, and Human Skin Suit in 1988 on Greasy Pop. Sharon left the band and another line up shift with Martin Bland taking over the guitar vocals duties. In 1990 they released Smell Machine 7" and The Truth Is Marchin In LP for Aberrant. Soon the band was put to hiatus after Renestair and Martin had joined Lubricated Goat on a USA tour. In 1991 the band line up changed again, but this time in Seattle with Renestar, Martin and Mark Arm. They released Broke 7'' on Bell town records in '93, In a Gadda da change(1993) and 10 Solid Rockin' Inches (1994) on Sympathy For The Record Industry...and I don't know much from here.
OK, here's what you've all been waiting for, the '88 Human Skin Suit:
Big Daddy Gonz
If That's Ok
Too Busy Dying
Nutbush City Limits
Honey Girl
Posted by Dan "Cluster" at 11:37 AM No comments:

The No.1 Mix Tape of the Northwest Noise

I've never intended to post mix tapes, but because the time doesn't allow me to do much writing I thought it wouldn't be a big deal to post some mix tapes from time to time.I guess every viewer of my blog would expect something obscure, that's why I tried to do my best.Be afraid, be very afraid because some of these bands will have a post of their own in the known feature. Enjoy....

The secret of John Bigley lies on Amphetamine Reptile

In a past post I've declared myself a big fan (I don't know if these were the exact words) of Amphetamine releases. Everything started when I heard the 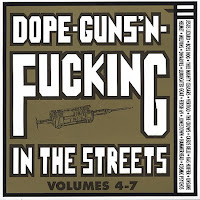 Smells Like Smoked Sausage compilation, and you might think everything started from a Dope, Guns and Fucking ...but no. Helios Creed, God Bullies, Surgery, Cows, Helmet (and I hate it when people call it a grunge band)...were my introduction in the street level post punk, dirty/noisy/sludgy whatever. My second wave was actually the Dope, Guns, and Fucking compilations, which, for my surprise made my day with some Seattle bands too. I remember that in the same period I was also into Crawlpappy's Deluxe and some Lonely Moans. Anyway, anyhow, anywho the very first song from the compilation that got stock on my mind after the first listening was The Crows Capital Hillbillies.

I've allways considered Bigley one of the strangest frontmen in Seattle, and I knew from the first U-Men single I've listened to that I would enjoy every musical project of his..but the Crows would be his last one and wouldn't make much of a record 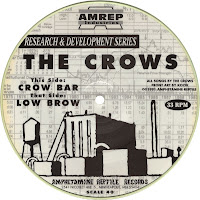 history.So, The U-Men broke up...I don't know if it happened before they throw up a song on the famous compilation, Bad Little Woman, and Tom Price left too form Kings of Rock with Haye, Don Blackstone and Dan "Reno" Ryan(Charlie Ryan's little brother).John Bigley and the drummer Charlie Ryan along with the guitarist Garth Brandenburg and the bassist Greg Stumph formed the Crows in 1991. The Crows released only on Amphetamine Rep: Crow Bar / Low Brow 7'' (1991) and The Crows LP (1994). Also Capitol Hillbillies on Dope-Guns'-N-Fucking In The Streets Volume Six and Go Look In The Crisper on Dope Guns & Fucking Up Your Video Deck Volume 2 . In '94 the band called it quits and the hole Seattle scene kind of faded away. Greg, Charley along with Tom Price and David Duet (former Cat Butt singer) formed Bottle of Smoke, and John Bigley I think he owns a restaurant or something. I’ve once read, I don't remember exactly where, that The Crows sounds like a slower and bluesy version of The U-Men.So, do you agree?

Oh, yes...and please be my guests in leaving comments...