DC Beggars: A short trip to the Rathouse

Although it is kind of late, I’ll give it a try to see if that Santa costume still fits me. Now, five days after Christmas and before breaking into the new year, I’ll try to make some grunge fanatics happy by spreading the word about another unspoken and requested band, namely DC Beggars. 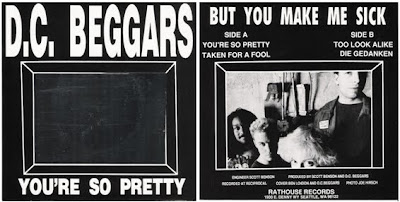 The band story began in 1989 after Carla Sindle left Ohio for Seattle leaving behind the punk rock band Fallen Chandaliers. A year later she became the lead singer for the just-formed band DC Beggars. The band membership included Carla Sindle on vocals, Adrian Garver on bass, Steve”Hougie” Gero on drums and Julian Gibson on guitar. In the same year the band moved into the Rathouse (19th and Denny Way, Seattle) which was actually a practice space at the Central District. Other bands that fit that crew were The Gits (they actually owend the house), Officer Down, 7 Year Bitch and Alcohol Funny Car. In 1991 DC Beggars were featured on the first Rathouse release, Bobbing For Pavement - A Seattle Compilation, the band’s contribution were two songs, Tale Of Lies and Narrow As A Sin. Other bands featured here: Gas Huffer, The Gits, Bay of Pigs, Big Brown House, Hammerbox, My Name and The Derelicts (this compilation was re-released on CD in 1994). Same year (that is 1991) the band made their second appearance which was actually the second Rathouse release You're So Pretty But You Make Me Sick 7’’.

Not much I could find on the internet about the next band’s release, that is: Love, Money, and Power 7" EP (Smiilin' Ear) in 1992. What I did find interesting was actually a little review taken from 10 Things Jesus Wants You To Know fanzine:
“Finally over a year later we get another offering from this wonderful underrated punk band. Deathtrip is unlike their past stuff, it's heavy pounding with snarling vocals and very powerful. The songs on the flipside are the Beggars I remember, powerful female vocals and the guitars, bass and drums are definitely heavier. Black Moon Rising reminds me of early Siouxsic. This bands deserves an album now! --Dan
Their best release to date. A-side is an atypical Beggars tune--more melodic and less thrashy then usual, and it works really well . Great song. Flipside is more what you'd expect, showcasing singer Carla's Jello-like vocals. –Parker”

From ’90 to ’93 the Beggars’ did extensive tours in USA, Canada and Europe. Finally the band was featured on another compilation called Power Flush: San Francisco, Seattle & You released by Broken Rekids and Rathouse Records featuring Seattle bands such as Alcohol Funny Car, 7 Year Bitch and The Gits. Sadly, same year, Mia Zapata is murdered, DC Beggars dissolves, and the Record Label resigns.

I would be really glad to see some comments on this post. Also if any of you have the Love, Money, and Power EP or You're So Pretty 7’’ please send me a link with them.
Now late-Santa Dan is sitting comfortable on his chair wishing you all a Happy New Year.

from Bobbing For Pavement - A Seattle Compilation

Narrow As A Sin

This is the first piece of writing that I’ve ever done on a Seattle hardcore band. I won’t post Mr Epp or Limp Richerds as you might have expected. I’m happy to surprise my readers once again with a post about Jesters Of Chaos. The idea for a Jesters’ post stroke me about two weeks ago, after finding a Discharge 7’’ in a record store.Somehow a connection formed in my brain...in a way, those English dogs reminded me of the Jesters. Although the band fits more into the wide variety of UK political punk rather than into the noisy hardcore of northwest…Jesters of Chaos played a significant part in the early Seattle Punk scene during the late 80's. 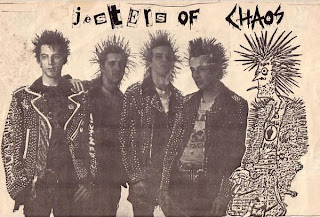 The band formed in 1985 in Seattle. They had numerous changes of drummers and bass players, the only constant member remaining Jeffro (voice), Maddy (guitar) and Kenny (second guitar). They finally set with a solid line-up in’87, now, also including Tyler on drums and Theo on bass. In ’88 the band recorded 13 songs (only 4 of them made it to vinyl) and a self titled Ep (released by Horton/Reflex Records) including the songs: Behind a mask, A message, Violent States Of America and Murder of the church.

I couldn’t find much information about the band on the web …I assume they split up in the early ‘90s. Lead signer, Jeffro, died in ‘92 due to a fatal motorcycle accident. Except Maddy, who now plays in The Bloodclots (myspace here) there is nothing I could find about the others. I know I’m forgetting something now…oh, yes…They shared bills with: Subvert, The Derelicts, Aspirin Feast, Coffin Break, A.M.Q.A, No Means No, Accused, SGM, Poison Idea, Soundgarden, Skin Yard, and other few more.

I grabbed a(n) (almost) 19 minutes long mp3 (from this page here) with the full demo cassette of the band. So check this page up…lots of diy hardcore punk, covering Seattle and Portland as well. See you next time.