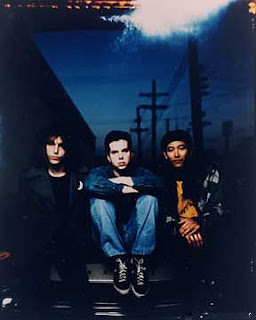 Some people say that if the record had been released in 1991 it would definitely have eclipsed Soundgarden's Badmotorfinger or Screaming Trees Sweet Oblivion. But '91 had already been overdosed with a lot of great albums, so...Truly's debut album was "kept" as the final scream for the Seattle Sound.

Truly was formed in late '89 by Robert Roth (just after his band Storybook Krooks dissolved) and ex Screaming Trees drummer Mark Pickerel. They played a couple of demo tracks for Sub Pop and also opened for Jesus Lizard. Finally, the last piece of the puzzle....ex Soundgarden bassist, Hiro Yamamoto, was invited by Mark to join the band in '91. The same year, in September, their first Ep was released by Sub Pop. I don't know if it’s just me, or the web is more populated with Truly's Ep Hearts and Lungs. And if that's so, the main reason would be the movie Singles(Yes, I've watched the movie but I've never liked it)...Also the Ep described the band as a pure power-pop/indie trio. A highly recommended song will be Married in the Playground which was a hit on the local radio...but let's see what happened later.
The band started the recordings for a full length album in the spring o 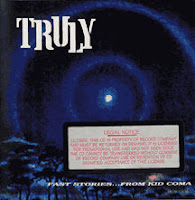 f '92 and lasted till '94, the result...a much heavy sound. Fast Stories...From Kid Coma was released in June '95. Capitol Records released the Cd version of the Lp, and Sub Pop Records released it in a 12" double vinyl. I honestly enjoyed more their Fast Stories... era sound. My opinion: it's more dramatic in both melodic and lyric ways and all the songs seem to have this dream sensation
The Sub Pop version contains an extra song, Aliens on Alcohol. Also, both tracks Leslie's Coughing Up Blood and Virtually were released in '93 as a 7'' vinyl single.
If You Don't Let It Die
Hot Summer '91
Leslie's Coughing Up Blood
Tragic Telepathic (Soul Slasher)
Virtually
Aliens On Alcohol
Posted by Dan "Cluster" at 12:01 PM 2 comments: 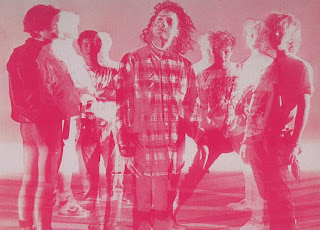 While searching for a bit of a story about SGM, I was surprised not to find a thing, except a couple of blogs that didn't give me any new information on the band, and some wise ass comments of how bad the album was. The cover of the Lp reminded me of the trash metal and crossover bands of the ‘80s, although from the first song, "Back in Circulation", I was taken to the Green River "Dry as a Bone" era, but more aggressive...hmmmmm...I guess what comes to my mind now is something between Green River and Cryptic Slaughter full loaded with dumb and moronic lyrics. So the internet sources were kind of cheap, but my luck was that Adem Tepedelen reminded quite a few about the band and also "financed" my blog with a couple of articles. One of them was actually from Backlash music fanzine published by Dawn Anderson (which originally was called Backfire).So now I guess I have enough information to put together a little story about SGM.

The band nucleus was formed in the mid '80s while Paul Uhlir (drums), Cole Peterson (bass) and Rich Credo (guitar) were still in high-school. The band line up changed pretty quickly and in '86 it also included Mike Lawson (a.k.a Mike Loser) on vocals and Kriss Quinn on guitar. 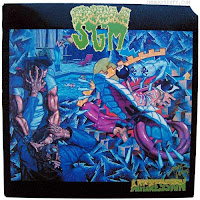 In the first two years the band recorded three sets of demo tapes that eventually led them to sign a contract with Medusa Records (a division of Metal Blade).The demo sets were finally released as Aggression in 1988, with the help of Jack Endino. Not long after the album was released, the singer, Mike Loser left to attend collage. So the band recruited another singer, Adam Czeisler. All five members decided to change their names into something that the initials S.G.M. would stand for. It seemed that Shotgun Messiah was so weak, so they finally agreed on Shotgun Mama. By this time they had a good reputation on Seattle, but the band wouldn't last long, they broke up again and Kriss Quinn left to join the first version of Truly.It will reform again as Sweet Water in 1992 with Dudley Taft replacing Quinn on guitar. At this point they sounded nothing like SGM, of course their sound changed after Mike left, and now the band sounded slick and mainstream. So that's kind of it, before we metamorphose this post into a Sweet Water one.

About the tracks...well I understand Cole Peterson (a.k.a Captain Blackout) also shines on "Blow Job", the song "She" is actually a Kiss cover, and "Tap the Keg"-and I won't post this one- is a rap song which reminds me of Beastie Boys back in "da days", and it features Paul Uhlir (a.k.a Pablo) as MC.Enjoy...
Gutter of Pain
She
Do Me(T'ill I Die)
Back in Circulation
Blow Job
Posted by Dan "Cluster" at 10:04 AM 11 comments: