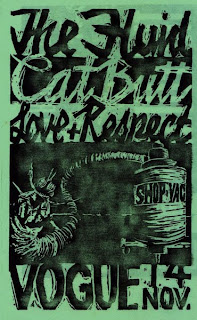 Sorry about the lack of posts lately, but I've been a little busy with the beginning of my second year at collage...also with the moving in and everything. I’ve, once again, left my hometown and I won't really come back until the late next year’s summer.

Having in mind the last post (that is the Stomach Pump one) I've done some research on Penultimate Records. Before I got in touch with the founder, Volker Stewart, everything I knew was that this record label released little material from some of the Northwest legends like Cat Butt, the Derelicts, and of course Stomach Pump. Therefore my dark-spy-side told me I had to find out some inside information. So, I contacted Volker and he was kind enough to answer me with an essay he wrote about his record label:

I guess the label itself was born in 1986 to release a tribute album to a music club in Santa Cruz, CA - the record was a comp called "At Dianne's Place." I had been approached by two other folks, Stephen Long and Rojir Silverstein, to help them with the project as I had some limited experience as a portion of the business that started as Masking Tapes, a cassette-only label, which eventually morphed into eMpTy records, which later split into two entities, and I am sure you can find the grim story about that in a number of places.

In 1987 I moved to Seattle, as it was a cheaper place to be unemployed than San 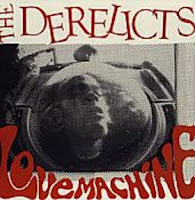 ta Cruz, and I was toying with the idea of grad school. I got to know some folks in the music scene, primarily through the fine folks at Fallout Records and Jimmy the Budman. I decided to pursue Penultimate in the northwest, and the first record I did was the CatButt"64 Funny Cars/Hell's Half Acre" 45. Blake from eMpTy, with whom I had gone to high school in Germany in the early 80s, had moved to Seattle, and we decided to make it a split release, Penultimate/eMpTy. This cooperation continued with the first Derelicts 45"Bullet for Fifi/Sharon Needles", although the release after that (the Derelicts "Love Machine"12") was just a Penultimate release. Blake had at this point started doing exclusive eMpTy releases, and we were in a friendly rivalry from this point on (obviously Blake was infinitely more prolific than I).

eMpTy Germany licensed the Derelicts material for Europe and somehow failed to mention any credit to Penultimate. Oh well. Sort of indicative of how they saw things in general, cf. their later legal action against Blake.

After the Derelicts I stumbled across Love and Respect, a great band featuring Ed from the Thrown Ups, Joe and Whiting fromBig Tube Squeezer, a stand up fellow named Steve LaRose on vocals and occasionally Steve Turner on lap steel. Their show at Squid Row knocked my socks off and we did a 6-song 7" ep("Deep and Heatfelt") and later an LP ("The Love & Respect Record"). Still my fave part of the Penultimate portfolio.

In 1991 I was out of grad school, horribly underpaid, and a little bummed out by Seattle becoming a mecca. When I moved there in 1987, people in California thought I was crazy, and four years later those people were flocking up there. I decided it was time for a change of pace, and moved to Baltimore. Baltimore was a crazy place in 1991, it was quite a change of pace indeed. I figured I'd get some work experience here and go back west, now it's been over 18 years...I put out four 45s here, two by local legends Liquorbike and Helicopter, one by Primordial Undermind, and the ill-fated Stomach Pump 45. I say ill-fated because a good chunk ofthe inventory fell victim to a flood I had in a former house of mine, which also knocked out a lot of the Primordial Undermind 45s. There are probably only about 2-300 of either of these floating around, possibly less of the Stomach Pump.

In 1994 I quit my job as a university reference librarian and started working on opening a brewery/restaurant in midtown Baltimore. That was pretty much the end of my label career. We opened in 1996 and I have been doing that ever since. (http://www.thebrewersart.com if you are interested).

Stephen Long had moved to San Francisco at about the time I moved to Seattle, and he had a few Penultimate releases scheduled there, although only one of them saw release, a 45 by the Bay Area's Los Cerveceros, which featured former members of Bad Posture. I believe he lives in North Dakota now. Rojir had moved to LA long before hand, and I lost touch with him.

So there you have it. Let's just say...another mystery solved.

From "Bullet For Fifi/Sharon Needles":

Bullet For Fifi
Sharon Needles
Posted by Dan "Cluster" at 10:49 PM No comments: