"I'm gonna get me a ship, that can take me far away" 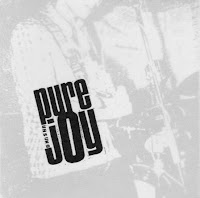 Well, the summer’s over and I’m trapped between dashes of nostalgia due to the occasionally rainy days. The only music that fit me in the past two weeks were either records from the 80’s post-punk/indie-pop glory days (such as The Church, The Cure, some Echo and the Bunnymen here and there), or Seattle’s finest indie/power-pop group Pure Joy.

I’m pretty sure most of you already know who Pure Joy was. Rusty Willoughby’s band before Flop rings any bell? Pure Joy was another damned Seattle band that never got much credit for the fantastic records they put out over the years. It was formed in 1986 by singer and guitarist Rusty, drummer Jim Hunnicutt, bassist Lisa King, and keyboardist Randy Willoughby.

My introduction to Pure Joy was also the band’s first release, a self titled Ep released in 1986. Didn’t really impressed me the first time I’ve given it a listen, but later I came to realize that The Attempt, Courage and not least Ocean, were actually pretty cool tunes.
My true love for Pure Joy actually began with the first minutes of their Unsung LP also known as Welcome to my New Psychotic Dream. The LP was recorded in 1987, with the intention of being released by No Big Business Records, which never happened. It would later be released on CD by Flydaddy Records in 1994. This LP is definitely the piece that defines Pure Joy. It is more poppy than the first EP and now the band starts to sound more like Rusty’s post-Pure Joy band, namely Flop. Also note that for this record the keyboardist Randy Willoughby was replaced by Craig Montgomery.
Craig didn’t stick for long as the band quit the keyboards for their next records: Now I Know single (Fat Bald Records , 1988), Carnivore LP(Popllama, 1989) and the live EP, Sore Throte, Dead Goat (No Three Records, 1990).

Pure Joy broke up in 1990, Rusty formed the fantastic power-pop group Flop, and…I don’t know what happened with the rest of the crew members, except that in 1997 Pure Joy reformed and put out two more full-lengths: Getz, The Worm (The Great Utopia/Flydaddy, 1997) which sounds great, like a psychedelic version of Flop, and Gelatin and Bright (Book Records, 2003).

from S/T EP (Dwindle, 1986)
Ocean---->was also included on the Lowlife Compilation LP (released by Ironwood Records), for which I’d kill to listen to...Any chance you have it digitized?

from Carnivore LP (Popllama, 1989)
Whatever i can grow
This condition