The Limp Richerds: War Between the States 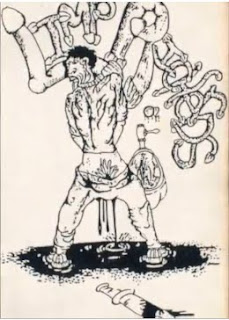 Like many of you had noticed Mr Epp, unlike the Richerds, caught more attention over the web, and almost all of their material is pretty common among the collectors. I’d say there are two reasons:
1. Mr Epp featured Mark Arm as a full-time member (in Limp Richerds he only played for a little while, behind the drums). This really does it for the grunge-fiends…Or not!
2. A compilation containing everything that Mr Epp recorded was released in 1996 through Darren Morey’s (a former band member) label Box Dog and in conjunction with Steve Turner’s Super-Electro Records. This made their material much easier to circulate even though the CD is now out of print.

Limp Richerd formed in 1981, around Dave Middleton who, back then, was a student at the Highline Community College. The very first incarnation of the band was: D. Middleton on vocals, Ross Guffy on drums, Charles Quain on guitar and Greg Billingham on bass. As in many cases of their contemporaries, people were coming and going, so the band didn’t had like, this stable line-up. I could say Middleton was for sure the only constant member. Mark Arm, Bill Connell were among those who played drums at some point. Scott Schickler and Steve Turner shared guitar duties…A couple of other bass players: Scott Warner and Werner Cooke. Lots of people…but they had time…from ’81 ‘till early ’87.

The band made its debut on The Public Doesn't Exist compilation tape in 1983 with Bob Hope's USO El Salvador Show. They threw two songs on the famous What Syndrome compilation, namely Death to Ivars and Non-Conformity Sox (live) in April 1983. In May the same year they released War Between the States a 7’’split with Portland’s Rancid Vat (which you can also hear on Puget Power III with Breaking Bones , let me know if you have any other material from these guys). They were featured on Sub Pop 9 with My Dad Forgot His Rubber in the same year. Finally, they put up an S/T cassette in December ’84 on Deus Ex Machina.

They played with a lot of local bands such as: Thrown Ups, Mr Epp, The Rejectors, The U-Men and so on, they managed to open for Husker Du in ’84 and for Dinosaur in ’86, and that was all. So there you have it…The Seattle’s worst band ever!!! 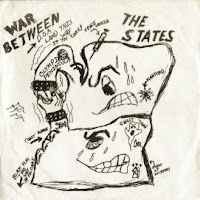 from War Between the States
Pat and Ben
My Dad Forgot His Rubber and I Was the Result
Non-Conformity Sox (live)
Death to Ivars
I've Only Got a Nickel on Me, Honest!
Posted by Dan "Cluster" at 6:00 AM No comments: