Three bands for Milton Garrison or a Vexed-related post 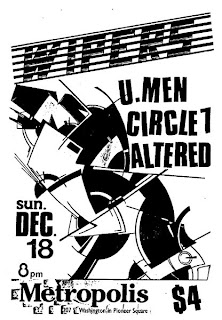 While I was searching on a gig poster website, about a week ago, I decided to type a rather familiar band, namely The U-Men. The only poster that drew my attention and finally made me came back so soon with a new mystery solved, was the one you see on the left. It features the great north-west legends The Wipers and the U-Men, along with Altered and Circle Seven.
I wrote here a little piece about Vexed a couple of months ago, and I got to admit I didn’t insist that much on the roots of the band. In other words, among others, I also forgot to note that other previous bands in which Milton Garrison played before Vexed, were In Vitro Pope and Altered. Apparently Milton’s website doesn’t mention anything about these last two or about his contribution in the band Yeast. And so quickly I was stricken by the idea of writing a post about all Milton’s projects. Being aware of not having any rich sources I could use, I’ve contacted Milton Garrison. He was really kind and answered to some questions I had about his music involvement along the years.

1. What can you tell me about the bands In Vitro Pope, Altered, and Yeast?
In Vitro Pope: 82-83
The band's genesis was a weekly jam among my self and two teen women non-musicians. At the time I could barely play and I was “the band leader,” if such a thing existed. We sucked badly in most ways but enthusiasm. But the U-Men, especially Tom Price, were very kind and agreed to play a party or two with us.. I never tried very hard to play the songs. I just made noise. I loved the band more than I can tell you. And shared a tear at it's terminal moment.

We have a demo tape which as I recall was recorded in our bass player's attic. The session was really called for Limp Richards a NW noise band if there ever was one. But since it was at our bassist's house we horned in and got a tape out of it. My chief bit was to turn the phaser on full and bash all six of the strings of the fender copy (property of Patrick McCabe of Drills, and active on many recordings of the drills,) and wail about the existential wash that was Reagan era landscape. I think Jack Endino digitized it for me. I'll look again.

The Altered: 83-84
Hiro Yamamoto: bass
Billy Warner: drums
Milton Garrison: Guitar and Vox
At the time the In Vitro Pope tape was recorded, Billy was jamming with Hiro Yamamoto and Kim Thayil whom he had found through the grape vine. Both were fresh young men from Chicago.

Although Billy and I were best friends, I was seriously worried. Because you didn't have to go far to find a better singer, writer or guitar player than I. Having said that, at the time I was blossoming as a guitar player. I embraced song structure if not guitar technique. I enabled a different chord voicing for each song. Needless to say we weren't punk nor metal enough for most tastes.

Hiro decided to cast his lot with Billy and I. We spent several months woodsheding and then actively gigged. At one time Hiro and Billy lived in the same house with Chris Cornell. We rehearsed in the largest room, it was Hiro's.

Fortunately for us, we had good friends that got us booked at the big, for the time, all ages venue, Metropolis. We ended up playing at least five times there opening for national acts: The Wipers, and Violent Femmes among many peer local bands of the day. At that time the owner of the Met said that I made him laugh. Splui Numa was a proto grunge band of the time that also played often. As I recall , they were quite witty; as were Mr Epp, with stage banter. We were later joined by a talented singer and writer with which we gigged briefly. We never recorded.

Yeast: 87-89
Memory does not serve all personnel changes. The base membership was the following:
Al Tompkins: bass
Daniel House: drums and vocals
Matt Cameron: drums at one or two shows when our drummer bailed.
Milton Garrison: Guitar and Vox

Of all my bands this was the only “off” band that I gigged with. Formed with members of Vexed, Daddy Hate Box, Skin Yard, and Soundgarden it was also the sloppiest since IP. I also thought we had the best chance of getting a deal. Although Soundgarden was one of the few being signed by that time, things we're feeling ripe in Seattle.

I had heard Nirvana, Tad, and the rest and could tell something was changing. But I was sure Vexed wouldn't be part of it. So for a time, Al and I tried to take the band to a different level with trying different drummers and vocalists until I retired from public performance in 1990. I would reemerge to reform Vexed in 92'.

2. Did any of these bands release anything? (If yes, what was the record label and who was the producer(s) of the material(s)?)

Yeast was the only band of those listed above, other than Vexed, to record. C/Z records released: Too much of one thing b/w this; a 7” 45. We we're also on a Teriyaki Asthma. Jack Endino, Rich Hinklin and Phil Ek worked on various recordings.

3. With whom did Yeast share bills that era?
Yeast played with many of the heavies of the era including: Tad, Love Battery and Soundgarden. We also played with Common Language and other alt rock bands playing the circuit; Squid Row, The Vouge, the Central and other lesser known clubs.

4. Did any of the bands, In Vitro Pope and Altered, share a similar sound to Vexed?
Not really, none of the other bands I played in sounded much like 1988 Vexed. But you need to understand Vexed was really three different bands. The early 84 version was more similar to Pell Mell and Talking Heads than Killing Joke. That would come later when we nailed our style. So I'd have to say that early Vexed sounded like late The Altered and to a lesser extent, Alfred Butler's earlier band Death of Maratt.

5. Was Vexed already formed when you were performing in the band The Drills?
The collaboration I did The Drills happened largely in the early 80s. The earliest around 82'. So my involvement occurred during In Vitro Pope and The Altered. Some may have happened during early Vexed. 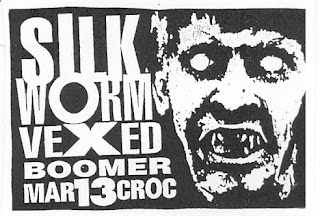 6.Did you perform in other bands after Vexed split?
You know I didn't until last year. I formed the band: Enter the Nine and played about a year: Myspace.com/enterthenine. This band had more to do with all the bands I've been and none. I say this because I put it together with out any preconceived notion as to what we would play. I called it a mix of Neil Young and Fugazi. It will sound like Seattle to some folks. And that's fine because I'm proud to be lumped with Seattle bands. I love that heritage.

7. Have you done any reunion shows for either of these bands?
I'm currently recording some songs on my PC. The bassist of Enter the Nine, Steve Alpers, will contribute to the project. I finished the preproduction in January 2010. I've since been layering. It will sound decidedly more pop than many of my previous efforts. But I sill love punk and metal and you can hear that in the mix. I will post the songs to myspace.

As for previous efforts: That's something I'd do in a heartbeat believe me and I think I've made it clear to one or two people of that. So for the record I'm interested.

Milton also offered to get me in touch with Allen Tompkins. I didn’t missed that chance as I wanted to find out more about the band Yeast. See bellow :
”Yeast was a collaborative side project that started with me, Milton, and Daniel House (CZ records owner) about 1988-89 or so. Over the short time we played together, we had 2 additional singers, Micheal Fantod, and Eric Johnson (Pearl Jam's go to guy). We opened for a number of fairly bad ass local shows, but never hit the road. That was really the only regret, but we really didn't need to tour.

Our single "Crisco Wristwatch" had both accolades and a bitter hate letter from the Yeasty Girls of NY... with a cease and desist threat, claiming first right to use the word Yeast... I remember that Daniel framed the letter and had it on the wall of the SubPop offices. The record cover, if you can find it, is classic!”

What are your best memories from that time?
“My coolest memory was a benefit show we did for The Fluid, on tour in Seattle, their equipment was ripped off. The lineup was pretty cool: Yeast opening for SoundGarden, Mudhoney and the Fluid. I remember passing out fliers the week before at a Mother Love Bone and Jane's Addiction show.”

from Yeast - Crisco Wristwatch 7''
Too much of one thing
This 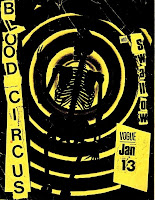 As, probably many of you observed, my blog was more of a record-friendly to C/Z or Empty Records than to Sub Pop. Probably Sub Pop will never forgive me for this (and that would be the reason they don’t answer to any of my emails….hmmmmmm….I was just kidding!!!) so I’ve thought of a way to make it up to them. Leaving aside Nirvana and Mudhoney, other legendary bands that were part of the Sub Pop 200’s generation were Blood Circus, Cat Butt and Swallow.
But the one band that rocked out the hallways of Sub Pop’s headquarters so loudly, that eventually made Jon Poneman and Bruce Pavitt to release a CD version of the band’s early material, was Blood Circus. The band was indeed the true definition of rock, even the title of their non-single material self-explains it, Primal Rock Therapy…..Not to mention that the lead singer of the band inspired me in letting my hair to grow long at some point, or that they messed up Pearl Jam’s plans to be the first grunge band to write a song about surfing.

The band formed in 1987 by T-Man (his real name, Tracey Simmons) on bass, Doug Day on drums, guitarist Geoff Robinson, and Michael Anderson (who played a short period in the first line-up of Swallow) on voice and guitar duties as well. They played their first show at the Vogue, opening for The Obituaries (and I’m planning a post about them some time in the future). Shortly the band was signed to Sub Pop and made their vinyl debut in 1988 with Two Way Streetb/w 6 Feet Under single (SP13). Next they contributed with the song The Outback to the Sub Pop 200 compilation and let everyone with their mouths’ opened, a year later, after releasing Primal Rock Therapy Ep . The EP was recorded by no other than Jack Endino at Reciprocal Studios, and features 5 songs. 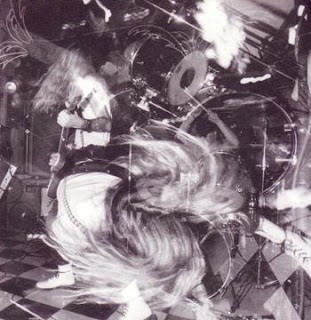 Blood Circus played tones of shows with most of Seattle bands and also shared bills with bands such as The Flaming Lips, Butthole Surfers, White Zombie, etc; they’ve had an U.S tour and split up in 1990. Michael played in Hard Belly Lloyd and T-Man joined the band Yummy for a period. Luckily Sup Pop reissued Primal Rock Therapy on CD in 1992(with their debut single and five songs from an aborted 1989 recording session) and the band did a couple reunion shows in Seattle.