I don't know about the weather in Seattle, but it sure was crappy here in my hometown. It made me go down to my basement and make a hell of a noise. Because I felt some kind of Bloodloss fever over the past two weeks, everybody was asking for Bloodloss repost at Lamestain, and I also discovered the Black Eye Records blog which focuses on the Australian scene (some Bloodlose, and Monroe's Fur...and many others), I thought it would be nice to check out what have Bloodloss former members been doing lately. The most interesting projects came from Martin Bland.
So, to find out more about his latest musical activities, I thought it would be cool if I could contact him and ask him myself about one of his projects, Martin Blands Randomized Control Trials. I did that, and he was kind enough to write me back.

Me: I understand that Martin Bland Randomized Control Trials wasn't a typical band. Can you tell us what was this project actually about?
Martin:No, it wasn't a band at all. The project consisted of having a number of cd players (usually 5 or 6) playing simultaneously. Each of the cd players would have a cd in it containing a different instrument playing short phrases. These phrases were separated into tracks on the cd and played with the random or shuffle button activated. I didn't want a "collage" effect so I felt it important that all the instruments should be playing the same piece of music at the same tempo so that even though the instruments were on separate disc players and would probably be "out of sync" in the normal sense they would interact with each other in surprising and unexpected ways. Interestingly, I found it worked better if the musicians did not know what anyone else had played so I recorded everyone in complete isolation, often moths apart and occasionally in different countries.

Me:How and when did you hatch the idea for this project(because indeed, it's a very weird one)?
Martin:I had been listening to Charles Ives Symphony #4, second movement (which I have up on my blog) one Sunday morning in 2002 and the clashing sound of the various marching bands all playing different tunes at once had me to falling off the couch laughing. When I picked myself up off the floor, the idea for the project flashed into my mind. I had been thinking for years that there must be some possible misuse for the "random" button on cd players but it wasn't till the advent of recordable cd's that this all became possible.

Me: Are there any constant members?
Martin:There was a small nucleus of guys I would use as often as possible, namely Steve Dukich on bass, Tom Price on guitar, Mark Arm on keyboards and Jim Knodle on trumpet. One thing I have found living over here in the US (I'm originally from Australia) is that most everyone can play some instrument a little bit and I tapped into that somewhat, enlisting friends and passersby to help out. I had very few people turn me down.

Me:You used lots of instruments in these songs; so how would you describe this music?
Martin:This is a very difficult question to answer. All of the pieces are very different and each was an attempt to explore different possibilities using the "randomized" medium. The pieces themselves and their rules dictated which instruments were to be used and it was then a matter of finding people who could play them. For instance, "Autumn In New York" is a jazz standard so I used the instruments of a jazz combo but I also wanted it to be a "drone" piece so I used "jazz" instruments that lent themselves to that also, ie horns etc. Other pieces were a blues (guitar, bass, horns, percussion), a space rock number (old analog synths) and so on.I guess the things that are common to all the music in all the pieces apart from an inherent and unavoidable psychedelic nature is a "fractured" sense of grooves starting and ending quickly without resolution. I've also found it helpful to listen for "miniatures" or smaller songs within each piece.

Me:I understand that you had an one hour long broadcast on KEXP, but what can you tell me
about Martin Bland Randomized Control Trials' releases?
Martin:I've done a couple of radio shows and this format seemed to work out pretty well for this project. I have also presented it in bars and other live performance spaces around Seattle and these were always rather odd experiences. Often a small crowd would gather in front of the stage and stare quizzically at the cd players stacked up on a table as if waiting for the machines to suddenly bust a move or something. Eventually the folks would drift off.The cd's are all hand made. Each cd has 6 tracks on it. There are 120 cd's in the series and each one has different versions of the six songs on it. That means I had to record 720 different versions of the songs. The cd's come in an aluminum cover and are hand numbered in braille (#1-#120). So each cd is basically a one of a kind edition. They can be purchased direct from at me mrbiand@yahoo.comI have also published a bunch of versions in mp3 form on my blog but these are all different versions to those found on the cd's. Because of the basic nature of the project, the variations in versions of each piece are pretty much infinite.

Me:You are currently playing in Desert Classic with Tom Price. When are you going to release something, and are there any shows to come?
Martin:We're just gearing up now to do some recording and then we'll have to figure out what to do with it. Putting out a cd these days seems kind of quaint but what are ya gonna do?. We seem to play in a lot of small, odd venues. We're due to play at the opening of a new pizza joint in a few weeks here in Seattle...

Autumn In New York
The Explainer
The Great Temptations Of Beyond
Posted by Dan "Cluster" at 8:35 AM 1 comment:

The Go Team, but more of a Kurt Cobain post 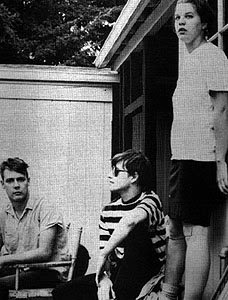 Ok, My Hairspray Queen is back in the house.
Now, I guess we all agree that searching for Kurt Cobain or Nirvana unreleased tracks is kind of fun, but really lame, and that’s because you know you’ll never going to find something that hasn’t been included on a box set or on some bootleg, unless a jerk-head switched the name of a modern post-rock band with “Nirvana” and then distributed it on the net. I’ve got to admit that I was searching for some Cobain’s unreleased tracks, two years ago, when I found out that he had a collaboration with The Go Team.

I’ve never been a big fan of Beat Happening or of any Calvin Johnson projects, and the only reason for posting The Go Team will be that besides Calvin Johnson, another member was Tobi Vail (feature Bikini Kill drummer), and like I said at some point, the band had a collaboration with Kurt Cobain.
You will read on Wikipedia that : The records were often collaborations with other musicians and the musical style varied from single to single. Kurt Cobain, Billy Karren, The Legend!, Dave Nichols of The Canannes, Donna Dresch of Team Dresch , Lois Maffeo, and Jeffery Kennedy were some of the artists the duo worked with.
And again from Wiki here’s a list with everything they’ve ever released :
Singles
"Sand/Jigsaw" (January 1989)
"Outside/Stay Ready" (February 1989) with Billy Karren, Louise Olsen, Dave Nichols
"Breakfast In Bed/Safe Little Circles" (March 1989) with The Legend!
"Milquetoast Brigade/She Was Sad" (April 1989) with Jeffery Kennedy
"Ribeye/935 Patterson" (May 1989)
"Go Team Call/Three Ways To Sunday" (June 1989) with Quang H, Billy Karren, Brad Clemmons
"Scratch It Out/Bikini Twilight" (July 1989) with Tamra Ohrmund, Louise Olsen, Donna Dresch, Kurt Cobain
"Tummy Hop/Maverick Summer" (August 1989) with Brad Clemmons
"The Pines Of Rome" (September 1989) with Brad Clemmons
Cassettes
Recorded Live At The Washington Center For The Performing Arts
Your Pretty Guitar with Steve Peters
Archer Come Sparrow
Donna Parker Pop
Compilations
Throw, The Yoyo Studio Compilation LP/CD (Yo-Yo Records, 1991)
Birdcrash Love Rock CS (K Records)
The Go Team was started by Calvin Johnson in 1985 when Tobi was 15 years old, I guess, and lasted 4 years; at the same time Tobi was playing in a girls band called Doris with Cheryl Hooper and Tamra Ohrmund(they made a demo tape which was recorded by Steve Ross of Cactus Love and has never been released).

“Scratch It Out / Bikini Twilight” was released in July 1989 and features Calvin on guitar, Tobi on drums, Tamra Ohrmund voice, Louise Olsen on bass, Donna Dreseh and Kurt Cobain on guitar.
The Go Team - Bikini Twilight
Posted by Dan "Cluster" at 12:09 AM 2 comments: