Like I promissed, My Eye related posts won't stop here..sadlly the gifts will. So there you go..the second part of My Eye's related post trilogy: 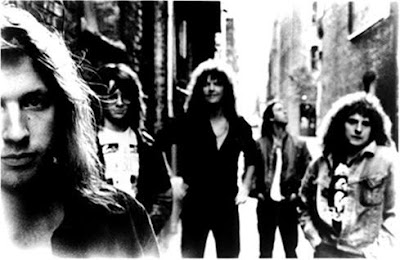 Founded in '89 by Steve Van Liew after My Eye dismissed, Bible Stud was Steve's attempt to get back to his hard rock/metal roots, what he initialy did with Overlord. Therefor he reunited with Glen Logan, the original Overlord's guitarist and put together the foundation of the hard rock/metal nearly grunge band, Bible Stud. Soon they were joined by Kenny Jakobsen on drums, Dave "Gundo" Gunderson on bass and Ric Vaughan on guitar. Same as usuall the internet was poor in info regarding the band but their myspace was pretty helpfull, here's a copy-paste from it (that is actually an article from the Rocket Magazine, year 1989, writen by Jeff Gilbert):
Sounding better than ever, original Overlord guitarist Glen Logan and vocalist Steve Van Liew have quietly kept their hard rock flame lit all these years, and with their new band, BIBLE STUD, it’s now turning into a four-alarm rock ‘n’ roll bonfire. This is due ,by and large, to Logan’s skill and mastery in songwriting. Tracks like "Blood Red" and "Tit for Tat" show confident swagger, bringing the energy level up from a steady simmer to an irresistible overflow boil. Van Liew’s half-cleared throat vocal style also gives Bible Stud an extremely distinctive, raw sound. As longtime partners Logan and Van Liew have used their hard, street level chemistry, channeling in into vital, pulse-pounding rock. Bible Stud also include Kenny Jakobsen on drums, Dave "Gundo" Gunderson on bass and Ric Vaughan sharing guitar duties.

I gues it was about two years ago...I saw on a web page an article about Bible Stud, mentioning that the band's name had something to do with their practice space. Anyway, any of you who remembers something, please leave a comment. Now back to the story...The band recorded two demos and released a single in '89 Cried/Tit for Tat. In late '90s, getting more further from any grunge influence the band metamorphosed into Crawl.The line-up: Steve on voice and guitar, Ric Vaughan also on guitar, Dave Gunderson on bass (later replaced by Denn Grim) and Eric Fenner on drums. Here's a little something about Crawl from Spin Magazine:
Crawl used to call itself Bible Stud.Overlord before that. You can call it what you want, the band doesn't mind. Heavy(of course), guitar-overdriven(surprise, surprise), and high gloss polished with sandpaper(ouch). Crawl is one of those bands that grows on you-like moss, and before you know it, you're doing the Swamp Thing. No Seattle cliches, just a deep, hypnotic, soulful crunch. Vocalist Steve Van Liew has one of the most distinctive voices this side of a blade sharpener...

I'm happy to declare myself as the first who has ever posted the Stomach Pump Single. Stay tuned...Next time---->Stomach Pump futuring Leighton Beezer from The Thrown Ups and Max Godsil and Duff Drew from My Eye.