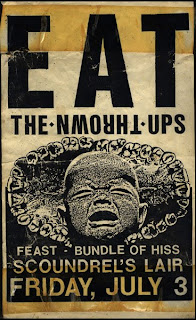 Sitting on the edge, bettween The Thrown Ups and My Eye related bands, here we have the first Stomach Pump post in the blogspots' history. Musically the band finds itself placed on the same page as The Thrown Ups, although it shares two of My Eye members. From the very first minute of their (only) single -Log Clench/Cake Hole- the band reminded me of the early swamp-punk australian acts, I'd say, the band is like a dry mix between The Scientists and Salamander Jim. Their music is accompanied by this unic voice, something you'll never find at a typical Seattle band(this "typical" line is really funny!!!). Conclusion: Another great, short-lived Seattle band. Therefor it was time for me to hit Google.

The investigation in finding a clue that would eventually lead me to a story began. I've searched ebay in hope of finding a cover of their single, looked for the band's gig posters, but nothing. Finally my search stoped here at this Leighton Beezer interview. But I still needed more of the band's info. So...the only thing left for me to do was getting in touch with one of the band's member. Who would tell the story better than the founder? That's right, I've contacted Leighton to ask him a set of questions about one of Seattle's mysterious bands and he was really kind and accepted.

1.Why did The Thrown Ups split up and when did you formed Stomach Pump?
Mudhoney was taking a lot of Mark and Steve’s attention, so I kicked them out of the band. Stomach Pump formed right afterwards and actually picked up an abandoned Thrown Ups show for our first show.

2.How did you recruit Max Godsil and Duff Drew from My Eye?
I used to hang around a lot with My Eye, and Max and Duffy were a really great rhythm section. I don’t recall the exact details, but basically I think I roped them into it.

3.What about JC, how did you recruit his as the singer and what happened to him afterwards?
JC was a Thrown Ups fan and we got to be friends. When the Thrown Ups broke up, he wanted to give it a try. I’ve found that for the style of music I play, singers are always the hardest to find and I will usually try to build a band around one if I find one. So once I realized JC had a gift for it, I decided to put a band together. He is a talk radio jockey today living in Austin , Texas and goes by the name Jack Blood.

4.Who came up with the band's name and why Stomach Pump?
I think it was me, but I’m not sure. It kinda stuck without a lot of thought. But in retrospect, it was an appropriate name for a follow up to the Thrown Ups. Once you’re done throwing up, you can only get more through mechanical intervention.

5.The band sounds to me like early Australian punk acts, would you regard them as influence?
Not a huge influence, but we were certainly aware of and admired bands like The Scientists, and Lubricated Goat and that ilk. Not too shocking if it sounds like we were wallowing in the same swamps.

6.Was Stomach Pump based on the same improvising idea as The Thrown Ups?
Yes, absolutely.

7.What can you tell me about the shows, who did you share bills with?
We didn’t share too many bills ... we were kind of a scene unto ourselves. We played a lot of warehouse parties and things like that. I remember one show where we were opening for another band and we kept mispronouncing their name just to bug them. I also remember doing a show where Stephanie Sargent from 7 Year Bitch performed with us. I think she ended up making fun of me the whole time and I didn’t realize it until later. My favorite show was at a place right off of Hollywood and Vine in LA, which was reputed to be Bruce Lee’s dojo ... musically, it wasn’t a great show, but it was a lot of fun. The room was designed to amplify sound, so Bruce could speak softly and be heard by a crowd of a couple hundred people, so we set up where the speaker is supposed to stand for maximum acoustic amplification and proceeded to blast everyone out the back of the room – it was painfully loud for the audience. A woman came up to JC and complained about the volume and JC pulled a switchblade out of his pocket and told her to shut up. Lots of fun!

8.Was the Log Clench/Cake Hole Single the only band's release?
Yes. We did put together some informal cassettes if that counts. One was called "The Caucasian Album" and another was just referred to as the "Be a Dick" session. Both were pretty good, but I don’t know where to find copies since I haven’t had a cassette player in years. I’d love to hear them again if anyone else is able to track them down for you.

10.Why did the band breake up?
I don’t remember exactly ... people kept moving in and out of Seattle . JC and Max both moved to LA at different times. There were a few gaps while people were out of town, then I guess the last gap just hasn’t ended yet – JC and Max are still living in different cities and I just moved to NY. Eventually, I started playing with another improv band called El Grande Conquistador (http://johnbeezer.com/music/egc.html). Now that I’ve left Seattle I’ve got a new band in NYC but we’re still going through line-up changes, etc. so we don’t even have a name yet.

11.Could you tell us something about your future projects?
I’m pretty psyched about the new band here in NY. The singer/keyboard player is named Jason Dennie and the drummer is named Jerod Allen. We just lost our guitar player since he moved a couple hours away and started going to night school. I’m also recording a lot of solo pieces just for my own amusement ... some of those are on my MySpace page: myspace.com/johnleightonbeezer

Again...any of you who own The Caucasian Album or Be a Dick Session, please contact me at myhairsprayqueen@yahoo.com

Now that we've got another case solved, enjoy: