I was looking for Ash and I found Crunchbird. Yes! A few months ago I began a little investigation about the band Ash. I didn't know anything about the band except the fact that they were featured on this famous gig poster. Next thing I found out was that the band was, among many, the one that Jaime Robert Johnson joined around '85 - '86. Jaime relocated from Detroit to Seattle in the mid '80s. He joined an early version of the band Crisis Party called, On the Rocks. Then he formed the band Urbanilla which recorded 6 songs with maestro Jack Endino, but during these sessions the band also called it quit. For the next couple of years Jamie kept joining and quitting bands such as Ash, Naked Lunch, Public Domain, and a few more. In 1987 he started working with Jack Endino on what will later become an earlier version of Crunchbird, called Ghostflesh, featuring drummer Art Jiron and bassist Lynn Paulson. By 1989 the band became Crunchbird and finished recording the Shit Happens cassette (only), with the new line-up which now included Lonnie King and KCMU DJ Captain Skillit Weasle. Also Jack Endino mentioned that he played drums on a couple of Shit Happens tunes, and also recorded a few of 'em. Nice! He also played drums for Crypt Kicker 5! 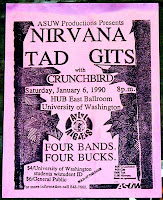 In 1990 the band played the famous 4 Bands for 4 Bucks! show with Nirvana, TAD, and the Gits at the Hub Ballroom. Soon after that, Crunchbird broke up and Jamie formed Karma, that will later become Angelspit. They recorded with Jack Endino the Youth Apocalypse Fashion Crime release and the Speculation/Dogs of Class Warfare 7'' released by Vagrant Records in 1994.
During this time, Jamie along with Geo Lane on bass and Erik Dannevig on drums, recorded a hand of acoustic tunes that were released as Reject in 1995, under the ''landmark'' Crunchbird. Next Jamie began recording a new potential Crunchbird record, Tales of the Ultra-Renaissance also known as Grungaholica. Musicians involved in this project were: Greg "Sledge" Peterson, Geo Lane, John "Baker" Saunders (from Walkabouts), Ian Raskin taking of bass duties, and Jack Endino and Simon Grant on drums. Grungaholica remained unreleased, with the exception of the song History that made it on the 29 Live compilation. Jamie was booked for an acoustic act for the release party of the 29 Live compilation at the OK Hotel in Pioneer Square in Seattle. The songs performed there by the band (now featuring Simon Grant on drums and Tannar Brewer on bass) were recorded in the fall of 1997. Five of those songs were released by the band, same year, as Vagrant Sessions (a limited edition CD). Then the band broke up once more and Jamie formed Electric Orchid.

Shit Happens is the pure definition of grunge. It contains elements of Nirvana's Bleach, Cat Butt, and maybe The Fluid, with strong vocals and distorted guitar riffs. In my opinion, this is probably one of the best scene-defining records. So...tell me what you think!
Crunchbird - In Deep Shock
Crunchbird - Subway Circle
You can also check out my youtube channel, here. Not many uploads yet, but there will be.
Cheers!
Posted by Dan "Cluster" at 12:57 PM 7 comments: