I'm taking a break once again

Sadly, really sadly my collage exams have just started so I'm finding myself forced to take a break for month or so. So what can I say...good luck to me and I'll be back with a lot of northwest obscurities.See you next time :D
Posted by Dan "Cluster" at 9:45 AM 1 comment:

Thrillhammer: The band that led the way for early Portland indie bands 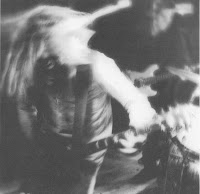 Portland had an amazing scene going on in the early '90s...It was the home place of dozens of indie band, and although it was in a tight connection with Seattle, the mainstream success was quite a different thing there. Unfortunately it was all pointed to one direction, Everclear, God dammit! This and the story bellow are the main factors for hating Everclear:

When I was six or seven years old my elder sister had this Everclear tape that she used to listen almost every day. One day (guess she annoyed me with something) I recorded a couple of songs from a radio station on her tape. One of the songs I'm preety sure it was The Cure Lullaby...Anyway, when my sister found out...ha ha ha , she beat the crap out of me...And that was the day I started heating Everclear or anything that sounded like it. Fortunately, my sister lost the tape when she borrowed it to someone.
Leaving Everclear aside(I've already mentioned their name enough times) I guess you all know/agree that the top three bands in early '90s in Portland were Crackerbash, Pond and Hazel. What you probably don't know is that Pond and Hazel had something in common, and that something was a short-lived band called Thrillhammer. The band formed in 1990 in Portland, line-up consisting of David Triebwasser-drums, Pete Krebs-guitar, Ben Munat-bass, and Peter also wrote the lyrics. The band did a self-booked tour down the west coast and in May '91 broke up. Looks like they released their only album-Ghiftless- with the help of Steve Albini, when they weren't even a band any more.
Ben Munat recalls : We had actually broken up on our ill-fated tour i

n May of 1991. But when we got home, we heard from Mike Morasky, our friend in Steel Pole Bathtub (who worked for Boner Records), that he had vouched for us with the newly formed German branch of Rough Trade records[...] The album was recorded in a few days at Dogfish Studios in Newberg, OR (which tragically burned down a few years later). We slept in the studio and got on each others nerves. (Well, I remember for sure that I got on Albini's nerves.) I think we probably needed a bit more directing. Albini has always insisted that he's not a producer, but is just an engineer... a sonic documentarian, as it were.
Since the band sounds pretty earth-shacking to me, I would have really loved to listen to another material, if they had released any (to bad they hadn't). This is one of the records that was really underrated and definitely needs a listen and a comment on the bottom of the post with your personal opinion(so don't be shy). Post-Thrillhammer, David joined Pond, Ben formed Rotor with Dale Moerer, formerly of the Oily Bloodmen, and Pond ex-member Ken Adams. Pete joined Hazel, and after that Stolen Sweets.
Thrillhammer - Pretty Dead Girl
Thrillhammer - Motor
Thrillhammer - Bleed
Thrillhammer - Jinx
Posted by Dan "Cluster" at 10:29 AM 11 comments: